Since it was break, I woke up at around 9:15. First things I did was check the blog to make sure people were still coming! And I was not disappointed! Thanks for those of you visiting almost every day!

Anyway, after waking up, I ate a piece of toast with peanut butter and honey. I t was delicious! You should try it sometime if you get the chance! So after eating, I went upstairs to refresh. After that, I changed my clothes and put my hair up. It was quite a time consuming process since, I couldn't get my bang to work with me! I was extremely frustrated! But fortunately, I eventually got it together and found a hairstyle that worked...at least temporarily.

Now you must be wondering where the nail polish and Computers part comes into this post. Well, it started like this...

After we refreshed and were ready, we decided to paint our nails; we being my sister and I. I found this gorgeous dark blue polish that I've never used before, so I decided to give it a try. It turned out pretty well if I should say. It was a whole other story for my sister. She was trying this beautiful dark red colour, but wasn't quite painting on the nail, if you know what I mean. To be honest I'm not much better. The trick is to leave it until it dries and then take off all of the polish that you smeared on your finger. Anyhow, since she definitely wouldn't be able to do her right hand (she's right handed by the way) she asked me to help her. Since I was feeling very generous and kind today, I agreed. Only after I started, she started to complain that the paint was just a bit off the nail. I explained to her that she could fix it after I was done doing her nails. Sadly for me, a few seconds after I finished painting, I watched as all of my hard work got wiped on a tissue paper. It was almost heart breaking! After seeing that, I was very frustrated and angry with her that I told her to do it by herself and stomped my way down the stairs and into our study room to get some homework done. I started with CAD 20, and then went to French. I'm not going to explain why I do this course on this post because it is irrelevant to the story I'm telling you. If you are curious, just post a comment and I will be happy to explain.

Anyway, after a few minutes, my sister comes down stairs and into the study room with her nail polish and nail polish remover. I regret not playing attention to this at the time. She started to blame me that she wasn't going to get all if her work done because I didn't help her with her nail polish. By the way, she does that same thing I do for courses. Anyway, I was so confused how her nails were related to getting her homework done, that I kind of felt bad. So I decided I was going to help her after all. Since I was too lazy to go over to her table, I asked her to come over to mine, which had my very expensive laptop on it. If you can't imagine what happened next, I'm going to tell you. The nail polish tipped over, somehow, and landed right on my computer keyboard!! I saw all of it slow motion. I tried so hard to stop it from spilling, but I was too slow!

After the spill, I quickly cleaned my keyboard up, making sure to get under the keys. Then I yelled at my sister, although it want quite all her fault. Then I went back to work thinking that the acetone will evaporate  before it could do any damage to my computer.

Guess what? I was wrong! After a few minutes of working, I had to type numbers, for some reason that I can't quite recall. When I types the number 5, it kept repeating itself without my doing anything. This got my heart beating. I could literally feel it beating, like it was trying to beat it's way out. So, I tried everything that seemed logical. I turned off my computer and turned it back on, blew hot air into the key slot, tried to stick a bit of Kleenex into the slot; but nothing seemed to work. So I decided to ask the Internet for help. I watched a video and I said to turn off the computer immediately after the spill...well too late for that! But I shut it down and unplugged the charger. Then it said to flip the computer upside down or to the side. Which  I did. The next step involved a lot of patience. It
said to wait as long as possible having that computer upside down. If you know me, you will know I'm not always the most patient person in the world. So I decided to finally break the bad news to my dad. This is how the conversation went... 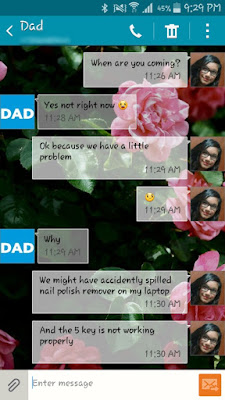 Then he told me how to clean it. He was pretty mad. I could understand this because he had paid for the computer and let me tell you, it was very expensive. Over a thousand dollars! I felt very guilty! But I couldn't do anything to make it better. So when my dad came, he quickly did the same things I had done. He yelled at me for a bit, but I guess I deserved that!

The sentence that he said that finally calmed my very loud heart was "...it should be fine. I think the acetone will evaporate with the heat." Then he went on to saying something about being more careful around things, but I didn't hear most of it because I was doing my happy dance in my head.

Then the sentence "...but it might not be okay if the acetone settled in between the two layers.", killed my happy mood. Then my heart literally skipped a beat.

So now here I am writing to you guys through the Blogger app on my phone. That's not very unusual since I always write through my phone, but the fact that it was the only major thing that happened today is weird.

That was a very long post. My fingers are getting very tired. So I think I'm going to stop now.
I'll keep you posted on the state of my poor computer!