I cannot tell how long we have been sailing, the first few weeks I had counted, but the seasickness and the mysterious illness I had caught had taken a toll on me, but we finally reached the new world. Lucky for me, one of the men on the boat named Alvaro had been a doctor a while ago back in Spain but had come in hopes of gold. Alvaro knew of my disease and miraculously had the medicine I had been needing; I had pocketed some extra in case this was the medicine that my Hermanita would need.

Before all of this, however, after weeks of seasickness, due to my lack of experience on the seas, we had arrived in Cuba, to find Hernan Cortes all ready with the plans. Although, the basic strategy is the routine that many voyagers and conquistadors perform to take over other tribes and areas, and it seems to be working remarkably. We are to exchange words in a show of a cordial and pleasant nature, and eventually work up to the goal of capturing the leader, therefore, taking control of the tribe. This was not the only plan Cortes had, as I learned from Alvaro, apparently, he devised that the best way to defeat the ancient and powerful tribe residing in the heart of this area, is to first make allies with other neighbouring tribes. Cortes believes that we have a chance at this and seems very eager to start. So, a few weeks later, we were back on the sea, heading towards the new world. 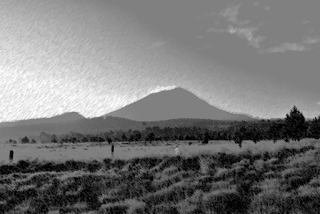 Now, I am standing on the soil of the mostly unexplored land, with many unknown tribes. The landscape here is very flat, filled, with many ponds and swaps. If you look far enough, you can see mountains lying proudly in the background. We have been here for a few weeks now, and during these weeks, Cortes had been brazened enough to go against Governor Velazquez’s orders even though he had been ordered to stop a while ago. Hernan Cortes declared the area of land that we were on, Veracruz, as an independent government. So now, this mission was not in the hands of the Governor, and Cortes can do as he pleases, so long as it does not harm the rule or beliefs of King Ferdinand and Queen Isabella.

The journey to Tenochtitlan, as many tribes call it, has been very harrowing, we have already made many allies, multiple tribes seemed very willing to help. It appears that the Aztecs are very brutal, yet efficient in their ways since many of the tribes have not hesitated in taking the hand of strangers. Nonetheless, there still have been some tribes that have been reluctant to help us, but eventually, they have bowed to our graciousness, which is to help or be killed, and other tribes have decided to choose the latter. Anyhow, I will report my findings and adventures later, considering that we have packed up and are ready to move again.